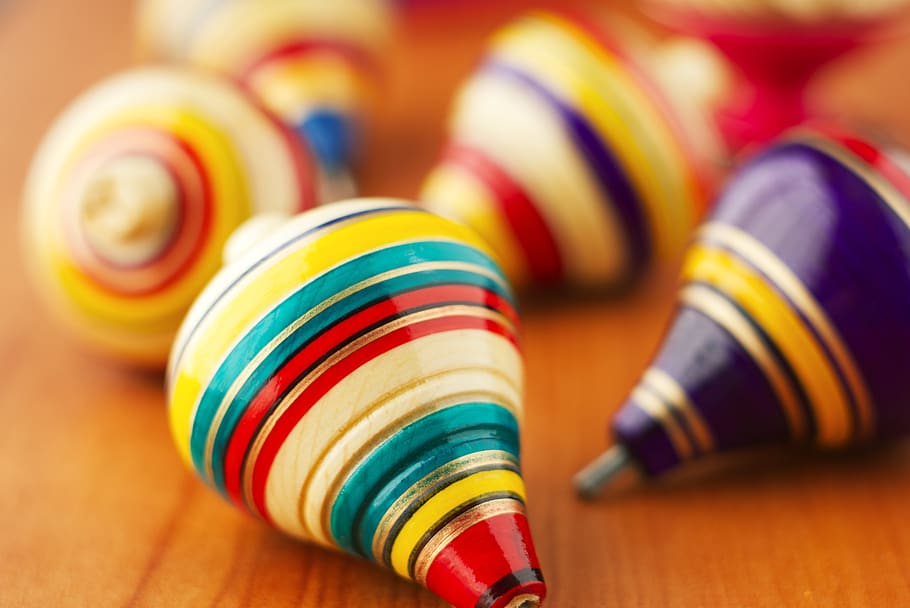 Tanya and Tanmay, are very dedicated parents to Ryan and Sophie. They always wanted their children to learn all types of activities and games that can help them in their growth and development. So during this time of quarantine, let us draw some inspiration from their list of traditional games that they taught their children. You can simply keep engaging children traditionally during quarantine by introducing a new game to your toddlers and preschoolers everyday. So let us understand each of them in detail

Lattoo is also known by the name spinning top. This is a very simple game and has existed in the Indian culture since quite long. It is one of Tanmay’s favourite childhood game. There are so many wooden tops of different colours available in the market today.

The game is to be played using a string/rope which is used to spin the top. You can take two tops and two strings and play with your child competing with him. Teach them to wrap the string or the rope around the top and then unwind it by pulling the string, making the top rotate on the ground. The player whose top spins the longest becomes the winner.

This is another name for famous game Snakes and Ladders. It is dice board game and the main purpose of the game is entertainment but it can also teach the players morality. The game can be played between 2 or maximum 4 players.

The game has a board of 100 numbers printed on it with a start and end point on it. Each player sets their coin at the start point and takes in turn to roll the dice. If the coin lands at the bottom of a ladder, the player will move up the ladder. But if the coin lands at the head of a snake, the player will slide down until its tail. The first player to move and reach the end point is the winner.

Antakshari is an entertaining Indian desi game which is now played worldwide with alterations. This game can be fun when played with more number of members, so you should definitely include this in your evening schedules if you have a joint family. To play this game, two teams are made. One team sings a song, typically a Bollywood song. The other team has to sing a song beginning with the last consonant of the song sung by the first team. Both the teams keep taking turns until one can’t think of a song and thus loses. Your child will definitely enjoy singing different songs with you.

This game is famously played by young children in the villages of India however does not require much space and thus can even be played indoors. The primary material required to play this game is round glass marbles which are generally green in colour. The game can be played by several players at the same time. The only objective of the game is to collect maximum number of marbles possible with the chosen marble. The twist of the game is that the winner gets to take all the marble home that he wins.

Chess is another famously worldwide game that was invented in India years ago. This game has the power to stimulate the mind of the player at a very different pace unlike any other games or activities. This game is beneficial to any age group. The game is played on a chess board by two players. Each player has 16 pieces and the objective is to lead the opponent’s king with a checkmate. Learn more about playing chess here.

We wish you luck with these games. Go rock this boring period by continuously engaging your children traditionally during this quarantine period.

Play is the work of child